Overall starts were down 2.8 percent but remaining just over one million and driven down by a 15.4 percent drop in multifamily apartment construction. Multifamily starts have tended to see-saw on a month to month basis but remain in the healthy range of over 350,000 per year when averaged over several months.

The continued modest improvement in the single-family market supports the expectation of more and stronger growth in 2015 as consumers gain confidence in their economic futures, mortgage rates remain very low by historic standards and home prices continue to be affordable to those with good credit and a solid employment history. 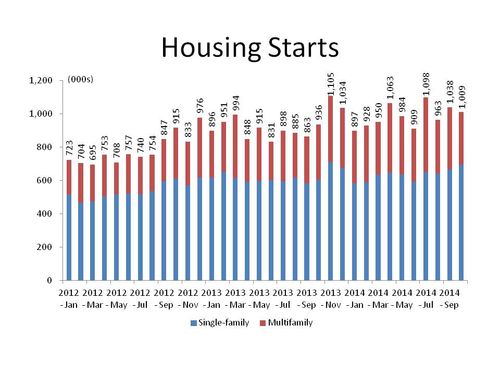 View this original post on NAHB's blog, Eye on Housing.

What You Must Know About Insurance When Buying a Home

Measuring the Value of a View

Do You Have a Real Estate Related Question?

Posted by Marina Sarabia and Kathleen Costanzo on December 16, 2014 at 07:22 AM in Around Fort Lauderdale, Economy, Eye on the Market, Florida, Real Estate, Weblogs | Permalink