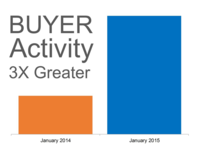 Freddie Mac recently released its U.S. Economic and Housing Market Outlook for January, looking at some of the positive tailwinds buoying the economy at the start of the year and why some may not stick around for long.

"On balance there are a lot of positive opportunities in the U.S. economy at the start of the year, and the real question is whether or not households and businesses will be able to seize these opportunities and make the most of them,” says Frank Nothaft, Freddie Mac vice president and chief economist. The reprieve in interest rates and drop in gas prices should help to spur economic growth. Until rates start to rise later in the year, housing markets should respond positively and we anticipate increases in home sales and continued improvement in construction activity. With rates lower at the beginning of the year, we'll see higher than expected refinance volumes as well."

Home price appreciation is expected to increase to a 3.5 percent rate annualized for 2015, a 0.5 percentage point increase over last month.

Expect mortgage rates to remain around 4 percent for the first two quarters of the year as long as uncertainty in foreign markets continues to result in a flight to safety into U.S. Treasury long-term bonds.

Among conventional 30-year fixed mortgage agency MBS, there are $361 billion with a 4.5 percent coupon and an additional $479 billion with a MBS coupon of greater than 4.5 percent. Many of the mortgage loans in the pools underlying those MBS would have an interest rate of 5 percent or higher, giving the borrowers a strong incentive to refinance at today's rates.

Due to lower than expected mortgage rates, the refinance share has been adjusted higher by 9 percent with much of the increase attributed to the boost from refinance activity.

As labor markets tighten, expect wage growth to pick up. For example, the National Federation's Independent Business Index for December shows most small businesses expect to increase employee compensation to the highest level since 2006.

Posted by Marina Sarabia and Kathleen Costanzo on April 06, 2015 at 07:34 PM in Around Fort Lauderdale, Economy, Eye on the Market, Florida, Real Estate, Weblogs | Permalink

Freddie Mac recently released its U.S. Economic and Housing Market Outlook for January, looking at some of the positive tailwinds buoying the economy at the start of the year and why some may not stick around for long.