U.S. Mover Rate Remains Stable at about 12 Percent Since 2008 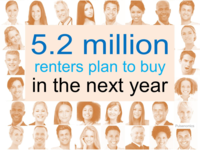 
“When the Current Population Survey started collecting migration information in 1948, about one-in-five people moved over a one-year period,” says David Ihrke, a demographer with the Census Bureau’s Journey-to-Work and Migration Statistics Branch. “Today, that number has fallen to about one in nine.”

This information comes from Geographical Mobility: 2013 to 2014, a collection of national- and regional-level tables from the Annual Social and Economic Supplement of the Current Population Survey. The tables describe the movement of people in the United States, including type of move, reason for moving and characteristics of those who moved one year earlier. Distance moved is also available for people who moved to a different county or state.

“The two releases and surveys conducted by the Census Bureau provide a detailed picture of migration in the United States,” says Megan Benetsky, an analyst with the Census Bureau’s Journey-to-Work and Migration Statistics Branch and one of the report’s authors. “Migration statistics from the Current Population Survey give us a national view, while the American Community Survey allows us to focus on smaller geographies and more specifically provides the only detailed information available on small population groups, like young adults, at lower levels of geography.”

The American Community Survey report describes the demographic and socio-economic status of movers ages 18 to 34 using data collected from 2007 to 2009 and from 2010 to 2012.

During the post-recession period:

The 6 (Not-So-Simple) Steps to Securing a Home Loan

3 Things to Think About Before Going FSBO

Posted by Marina Sarabia and Kathleen Costanzo on May 14, 2015 at 09:10 PM in Around Fort Lauderdale, Eye on the Market, Florida, Mortgage, Real Estate, Weblogs | Permalink

U.S. Mover Rate Remains Stable at about 12 Percent Since 2008